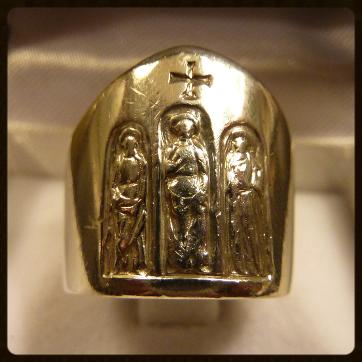 And when they were come to Jerusalem, they were received by the church, and by the apostles and ancients, declaring how great things God had done with them. But there arose some of the sect of the Pharisees that believed, saying: They must be circumcised, and be commanded to observe the law of Moses. And the apostles and ancients assembled to consider of this matter.

The Lord made Simon alone, whom he named Peter, the "rock" of his Church. He gave him the keys of his Church and instituted him shepherd of the whole flock. "The office of binding and loosing which was given to Peter was also assigned to the college of apostles united to its head." This pastoral office of Peter and the other apostles belongs to the Church's very foundation and is continued by the bishops under the primacy of the Pope.

The Pope, Bishop of Rome and Peter's successor, "is the perpetual and visible source and foundation of the unity both of the bishops and of the whole company of the faithful." "For the Roman Pontiff, by reason of his office as Vicar of Christ, and as pastor of the entire Church has full, supreme, and universal power over the whole Church, a power which he can always exercise unhindered."

"The college or body of bishops has no authority unless united with the Roman Pontiff, Peter's successor, as its head." As such, this college has "supreme and full authority over the universal Church; but this power cannot be exercised without the agreement of the Roman Pontiff."

~Catechism of the CatholiC Church, Paragraphs 881-884

The official site of the Vatican. The Holy See.

Documents & Teachings of the Church - Our Lady's Warriors

A list of Church teachings by topic and official Church documents, grouped by topic.

IS POPE FRANCIS A HERETIC?

Apostolic exhortation of the Holy Father Francis to the bishops, clergy, consecrated persons, and the lay faithful on the proclamation of the Gospel in today's world.

(29 June 2013) on Faith: A link to the official encyclical document from the Vatican website.

(24 May 2015) on Care for Our Common Home: A link to the official encyclical document from the Vatican website.

Everything you need to know about Canon Law, including what it is and the sources of Catholic Canon Law.

A blog by American canon lawyer, Cathy Caridi, who teaches and practices law in Rome. She provides clear answers to canonical questions asked by ordinary Catholics. Ask her a question or browse through previously answered questions.

The entire Code of Canon Law for your reading pleasurefrom the Vatican website.